Hello again! In the current state of the project, I still have a couple of things planned for the build and have already started talking to composers for music, but it's looking quite good in terms of finishing. However, this is going to be the last devlog entry for the time being. So I hope you enjoy!

Two teens are sitting on a billboard next to a calm highway. It's early fall. The treetops sway gently in a cool breeze. 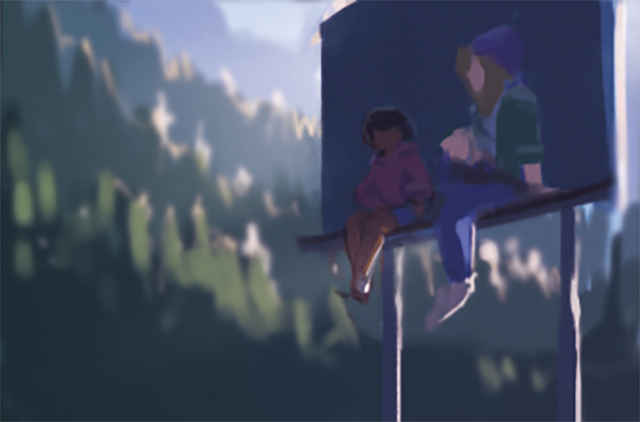 The scene depicted in Turnpike North consists of a number of fixed-angle shots, showing characters and environment. This means that as long as I can get the emotion across, I can work with all smokes and mirrors (=faking, faking, faking). I'm not concerning myself with building a level that works for walking through it but to create the illusion of one continuous environment.

Using Probuilder, I started blocking out the major elements in the color-key: mountains, road, the billboard and characters. Same as with characters, I start thinking of the largest shapes first and try to establish a sense of place. To quickly add a forest in the background, I used a particle system emitting from the mountain-flank meshes and a simple, scaled triangle texture. Enabling noise in the particle system and setting it to affect particle rotation make it look like the trees are swaying in the wind.

I knew I'd have a reverse-shot that shows Gertie, so just building the environment for the color key wouldn't cut it. I had to design the valley on the other side. I put down a couple of super simple house models, took a screenshot, and started painting over it to get an idea of what I was looking for. This method also lends itself well to figuring out how to improve something that already exists.

For the blocking of the valley, I reminded myself of the fixed camera angles I'd be using. I didn't build real-size models of the houses and the suburban neighborhood, rather, a tiny replica of one. To create the impression of distance, I scaled down  models that were "further back". I was surprised at just how well that worked.

Once I'm somewhat happy with the dimensions of the blocking, I start building individual props. By putting my block meshes into empty GameObject prefabs, I can easily replace the ProBuilder Meshes with the ones I'm about to make.  Asset fidelity is dictated by how close we're going to see them. So for e.g. the houses, I skipped the modeling part altogether and used the Probuilder Mesh with vertex colors. They aren't lit, in fact, the material is "unlit".

Whenever I can get away with just a single color set in the material, I try to use it instead of laying out and tweaking UVs for models that won't ever be seen up close. Another good example of this is the power poles. They're close to pure black. And it works just fine:

The largest chunk of work in the environment was the base mesh geometry. I rebuilt it based on the Probuilder mesh, laid out the UVs and textured it with repeating textures for the road and the grass. I'm aware that players won't be able to look at the ground in detail, so it was fine for me to just "make it work" (i.e. the result is not precise, it's sloppy but gets the job done).

The background clouds add a lot of atmosphere to the scene. They're simple quads with a low-resolution cloud texture. The magic lies in really low opacity, additive blending and the dithering the HPXRP provides in the material.

A note on jitter

I'm using a jitter packageI bought off the Unity Asset store. It's really valuable when it comes to creating subtle movement. The clouds are a good example. They're not just static meshes. I use an ever so slight position "jitter" to move them, more or less "in place".

To create the moving cars, I recorded multiple tracks as animations. I started setting the start and end positions of a track, then added and tweaked inbetweens, so it'd look like the cars are turning with the road. The tracks were then assembled in one looping Timeline sequence, with pauses in between and mixing + matching of faster and slower tracks in both directions for all vehicles.

I'm using four vehicle models in the scene. A textured truck and small car for the main shot and unlit, grey versions without texture for the valley shot. Having the far-away cars unlit allows me to tweak the colors to look just right for the fake distance I described above.

An end, for now

That's it for environments and for the devlog. I'll publish another update once I release the vignette. For those of you who followed this journey up until here, thanks for sticking with me. I hope it was worth your while!

Stay safe and see you around!

Creating a real-time PSX scene inspired by Life is Strange

thanks for the tutorial.  :)

You're welcome! I hope it was able to provide some insight ^^